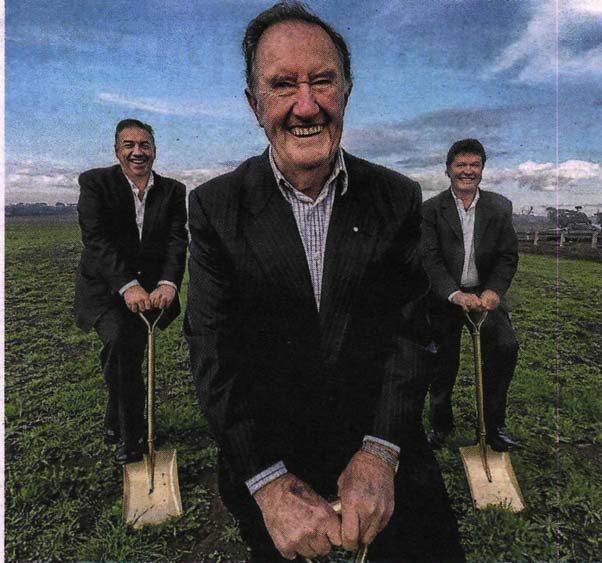 As the Dennis Family Corporation began work this week on its latest project, a 1400-lot housing estate at the fast-growing Armstrong Creek, outside Geelong in Victoria, it also began a new “capital light" development strategy.

The Ashbury estate is one of two pro-jects in Victoria where the company founded by Bert Dennis is employing a development agreement with local and owners.

The agreements allow Dennis to de-risk its balance sheet, reducing its out-lay on land acquisition while sharing development profits with the local owners.

“To do land development and to continue to expand, it is pretty hungry for finance,” Mr Dennis said. “And a lot of the owners would like to get a higher return man they would get from selling the land straight out “The developer is using the model to drive its even larger Westbrook project at Truganina in Melbourne's west as well.

All going to plan, the agreements will also be adopted at two more projects in Melbourne's north. It was in Queensland that the company first adopted the model, as land prices were rising fast “It held us in good stead for the GFC because we were very lowly geared and we were in ‘excellent shape financially when the GFC hit" said Grant Dennis, Bert’s son and the company's executive chairman.

So successful has been the model that about 55 per cent of its 20,000 lot pipeline is now captured in development agreements with local owners.

Another emerging element in the family business is the growing, albeit still very small, component of medium-density housing. That too is a legacy of the company's operations in Queensland, where it was faced with usually smaller land parcels and more frequently in brown field areas.

It’s not something the company has implemented yet in Victoria, where the market is awash with high-density projects. However, Peter Levinge, chief executive and Mr Dennis' son-in-law, said the company would look to grow its medium-density exposure as opportunities arose. “There are medium-density opportunities on our existing estates. We’ll see more of that over the next five years on our own land. “With 56 years in the property development industry, Mr Dennis is no stranger to opportunity. But its red tape, rather than labour costs, that are proving to be the most significant cost and impediment to development.

And its red tape that is most likely to frustrate development projects, even in the low interest rate environment “All over the world they have been have tried to use interest rates to stimulate economies and they have failed,” Bert Dennis said. “What governments haven't been game to tackle is the regulatory environment that businesses operate in.”

Mr Dennis reeled off a long list of imposts, ranging from development contributions, and the slow-moving approval system, to the requirements for parkland reservation and protection of native species. Its mind-blowing now.

It's regulation gone mad. "that s why the Dennis Family leadership - Bert, Grant and Peter - are wary of any changes to negative gearing, unless ifs part of a broader debate on tax.